Avoid News, Part 2: What the Stock Market Taught Me about News

It’s been a decade since I blogged about the benefits of avoiding news.

In that time I mostly followed the advice I gave. I kicked my addiction to The Daily Show in late 2016 after it switched from ridiculing Trump to portraying him as scary (probably part of a general trend for the show to be less funny). I got more free time, and only missed the news a little bit.

Then the pandemic hit.

I suddenly needed lots of new information. Corporate earnings releases were too slow.

Wikipedia, Our World in Data, Metaculus, and some newly created COVID-specific web sites partly filled that gap. But I still needed more, and I mostly didn’t manage to find anything that was faster or more informative than the storyteller industry.

That at least correlated with higher than normal stress. I suspect that paying attention to the storytellers partly caused the stress.

Do you want to focus your attention on problems that are most likely to hurt you? If so, the storyteller industry is likely to distract you: 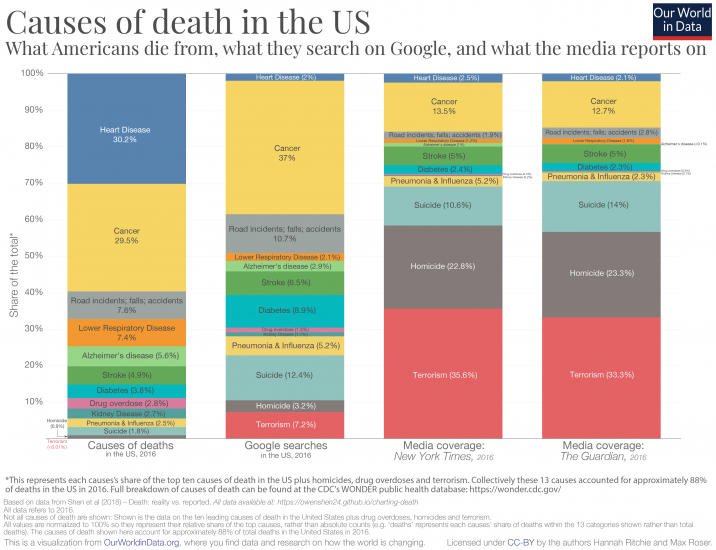 It’s hard for a daily news source to avoid that effect. It has to focus on recent, unusual events. When coal plants emit radioactive smoke, there’s little occasion to write about it, because it’s very routine, and not at all a sign that someone did something wrong when people initially adopted coal. Yet when a nuclear plant emits a similar amount of radioactive material, that’s a rare sign of an avoidable mistake. It’s unclear how the storyteller industry could avoid causing readers to pay undue attention to the nuclear mistakes. But the natural consequence is that readers will, at least subconsciously, treat that attention as implying more harm.

Storytellers could reduce the biases from that distorted salience, by sounding more worried in proportion to harm implied by their stories. But that conflicts with the goal of making their stories entertaining, and with the goal of maximizing the number of stories that readers believe to be important. Alas, few readers are willing to give the storytellers incentives to prioritize that kind of balance.

Preparing for the Pandemic

One of the bigger mistakes that I made in 2020 came from recalling that Ebola, SARS, the 1976 swine flu outbreak, and various bird flu’s all generated a modest amount of news, but little harm in the US. Even the older pandemics that did kill many Americans had little apparent effect on the stock market. So I gave low priority to studying pandemics.

In addition, I had traded a few bird flu contracts on Intrade, and I think made a tiny amount of money betting that pandemics were less likely than people thought.

But I wasn’t paying much attention to the storytellers at the critical times, so I can’t blame them much for my mistake.

In the spring and summer of 2020, I saw rather large discrepancies between my business forecasts, and the impressions that storytellers were promoting.

It sure looked like many commentators / storytellers were going out of their way to overstate the economic damage from the pandemic.

I presume that’s partly due to them trying to manage people’s fear levels: if people felt economically safe, that might cause them to feel it was safe to risk spreading the virus. Another reason might be that fearful stories selling better than happy ones.

Whatever the reasons, by mid to late April enough companies were issuing statements to the effect that the damage to their business wasn’t catastrophic, and that they were seeing signs of recovery. No single report meant a lot, but I read a lot of corporate announcements, and saw a clear pattern: business was better than most pundits were willing to imagine.

For much of 2020, there were widespread claims that Hertz shares were worthless, or nearly worthless.

That conclusion was superficially plausible, as it’s not unusual for bankruptcy cases to work out that way. But Hertz’s situation seemed unusually uncertain, and the pandemic triggered some abnormally fast business fluctuations.

It now looks like buying Hertz while it was in bankruptcy proceedings was a great idea given the benefit of hindsight.

I’m not complaining that the storytellers were wrong about what Hertz shares were worth. They did a decent job of identifying relatively competent sources of opinion on the subject. I’m complaining about the false implications about the competence of those sources. It’s hard to identify an expert who could convincingly report that nobody had the foggiest idea what would happen (unless you’re willing to treat market prices as expert opinions – in which case, why are you paying attention to a story instead of just looking at the price of Hertz stock?). Hertz ought to have been almost that expert, but legal risks pressured Hertz to slant it’s comments in a more paranoid way.

Hertz’s value ended up depending somewhat heavily on when vaccines became available. That’s an important topic where the storytellers failed badly. E.g. this headline claiming to be a “fact check” that said we’d need a miracle to get vaccines in 2020. That was in mid-May, when Metaculus was showing a significant chance that a vaccine would be proven effective by the end of 2020.

Some storytellers even spread the false claim that We’ve never made a successful vaccine for a coronavirus before. If you read the story carefully enough, you will notice it eventually hints at the caveat “in humans”. Vaccines for coronaviruses have been commercially available for several species of pets and livestock.

It took me a couple of months to see through that vaccine smokescreen. Doing so helped me to make lots of money in the second half of 2020 betting on pandemic-sensitive stocks (not Hertz), since most investors were too pessimistic about vaccines for much of that period.

Enron is an example of why I mostly ignore stories, and focus on verifiable numbers.

I heard a glowing report of Enron’s innovative management style in mid-2001 (at Extro 5), and likely would have noticed more such reports if I had been more addicted to storytellers. That report sounded plausible, and it would have required an unusual amount of effort for me to find anything wrong with that story. When I thought in terms of stories about Enron management, I felt a real temptation to buy Enron stock, and those stories would have seemed more salient if I had paid more attention to the storytellers.

Then I looked at Enron’s earnings growth, revenue growth, and return on equity. The revenue growth was fairly impressive, but nothing about the earnings distinguished it from a boring company.

I also looked at charts of its stock price. I saw signs that sellers were less patient than buyers. That usually indicates an ordinary fluctuation in business, but whatever, it counted as evidence that I could safely postpone buying, so I decided to wait. I kept waiting until it had clearly collapsed.

My most important strategy for getting good stock market information is to decide what information I want, to actively seek it, and to minimize my attention to what other people suggest I should pay attention to.

If I let the storytellers decide what evidence to use in evaluating a company (or an industry, or the economy), I’ll end up using criteria that are selected for other people’s purposes. Sometimes those purposes will be ideological, sometimes they will be to protect some powerful institutions, or maybe they’ll be mostly for entertainment purposes. The results are mostly not much better than letting one side of a court case choose which evidence I should look at.

More generally, I try to focus on sources that prioritize accuracy over entertainment (e.g. Wikipedia, Metaculus).

Alas, that requires some willpower. I haven’t managed to develop a consistent habit of looking at sites like that for information.

I also have some need for alerting myself to important events that aren’t on my radar. The Wikipedia Current events portal is such a source, but isn’t wise enough about what’s important to be a complete answer. I check news.google.com, but it’s click-baity enough that I keep hoping to replace it with something better.

Individual bloggers sometimes provide news-like benefits, especially when they’re aiming to earn respect from well-informed peers, rather than any of the strategies which require attracting lots of readers. Scott Sumner often meets those standards.

I’ve gone back to reading Tyler Cowen. He does a better job than Wikipedia of identifying important topics, but is much harder to skim – I can’t get much out of his blog without getting sucked in to spending more time there than I want.

Is it Getting Worse?

When I was young, there were fewer choices for how to get the knowledge that storytellers aim to provide. People chose between maybe three TV stations, and one or two newspapers.

That meant less competition than we have today. Less competition meant that storytellers had more freedom to write stories that enhanced the storytellers’ reputations with their friends and families. That created a modest tendency toward high-brow, consensus-oriented stories.

For example, the U.S. had many bombings in 1970s, often politically motivated. The storyteller profession was able to treat those as ordinary crimes, that we could mostly forget because the police were able to contain the harm to relatively minor levels.

Whereas today, we have storytellers that specialize in peddling outrage. At least some of them will have ideologies which will predispose them to overstate the importance of politically motivated crimes. Even those who are predisposed to downplay the importance will have some incentive to hype the stories in order to keep readers who are attracted to controversy.

Yet we also have information sources that replicate the high-brow, consensus-oriented features that newspapers and TV stations used to provide, e.g. Wikipedia. So my conclusion is that people who really want good information are better off today, but the average person’s information diet is likely getting a bit worse.

P.S. I don’t want to leave you with the impression that storytellers are mostly wrong. If they were, I could make more money by doing the opposite of what they say. Their actual track record is much more ordinary than that.

4 comments on “Avoid News, Part 2: What the Stock Market Taught Me about News”